History of the Library

The Norris Public Library traces its history back to 1921 when Mrs. Henry Norris and her daughters and several friends met to begin a lending library with books donated from their own collections and from friends in Philadelphia. First housed in the Mission House associated with St. Luke’s Chapel on the Rutherford Hospital grounds, the collection was moved in 1924 to the “Drummers” building behind the Isothermal Hotel which was located on the site now filled by the County Annex. Mrs. Lollie Hicks Reveley became the first librarian. The library was entirely dependent on membership subscriptions and donations. 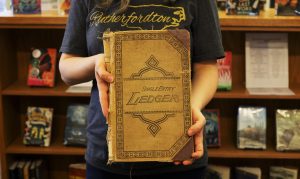 By 1928, the growing collection of the Rutherfordton Library was moved to the three-year-old Town Hall at the corner of First Street and N. Washington. With 1,892 volumes, the library was one of the largest in western North Carolina and boasted 354 members. The Rutherfordton Garden Club was originally organized for the sole purpose of promoting the library which received no financial help from the town. Mrs. M.O. Dickerson and Mrs. B.D. Wilson served as librarians during the six years that the library was located in Town Hall.

By 1932, the library clearly needed a new building, and a number of groups called upon the Town Board to construct a new facility. John Anderson, Jr. obtained a lot on Main Street from the town. Brick, doors and other materials from the McEntire Mansion, which had been demolished at its location on Main Street at Third, were donated by Jim Washburn.

Mrs. R. H. Crawford chaired the library building committee. Other members included Clyde A. Erwin, M. L. Edwards and Mrs. F. W. H. Logan. They approached Charlotte architect Louis Asbury who had previously designed several other buildings in Rutherford County. Asbury completed plans for the new library in one week and provided them to the town without charge.

Between 1933-34, the Garden Club contributed much time and money for the library. Their efforts paid for shrubbery, a furnace, book shelves and the installation and painting of screens.

The building was erected with $3,000 of free labor furnished by the Civil Works Administration (CWA). The building’s total cost, including equipment, was $5,263. 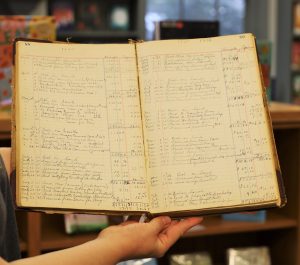 A long list of names was suggested for the newly constructed library. Because she was truly the founder of the library and continued throughout her life to be a loyal supporter, the library was named for Mrs. Henry Norris. The Norris Public Library stands as a living memorial to her memory.

The first elected board, including representatives from each of the civic organizations in town, a town council member, and two at-large members, was installed in December 1933. Norris Library held its grand opening on the night of Dec. 8, 1933, and Mrs. P. B. Cannon took the position of librarian of Jan. 1, 1934. With the opening of the new building, the library became a public facility, rather than a subscription library, and the Town began to assume financial responsibility for its operation.

Several different people served as librarians between 1934 and 1938 when Mrs. Eva Simpson filled the position. Mrs. Simpson served faithfully until her retirement in 1969. Mrs. Bertha Allen became librarian in 1969, remaining until her death in 1971. After a succession of temporary librarians, Mrs. Pat Hardin took the position in fall 1973 and remained library director until she retired in April of 2020. In August 2020, Mrs. Sarah Ross filled the position of library director.

The library board applied for and obtained a foundation status through the Department of the Secretary of State in 1999. In April of 2001, the Norris Library Foundation, Inc. received tax exempt status through the Internal Revenue Service.

In the years following the addition in 1987, several projects have been completed that have enhanced the library such as painting, new lighting, and a dedicated space for computers for the public to use. In addition, a new circulation desk, new AV cabinets, and new shelving for books have all been custom built.