The Heraldry of the Town Seal 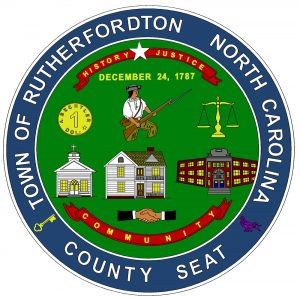 The Town Seal of Rutherfordton reflects both its vital history and its continuing values. The outer circle of the seal contains lettering designating the Town, State, and the Town’s status of being the County Seat of Rutherford County. Also contained in the outer circle are the symbols of a key, to represent the Town’s hospitality, and a Purple Martin that is part of the coat of arms of Brigadier General Griffith Rutherford for whom the Town is named. It is also used as a symbol of the Rutherford Town Revitalization and its efforts to maintain Main Street’s dignity, business and historic significance.

The Inner circle starting with the banner at the top contains a single star to represent this area as being part of the original 13 colonies and formally becoming a State on November 21, 1789. The Town of Rutherfordton was then already two years old.

The date, December 24, 1787, located underneath the banner is the actual birthday of the Town of Rutherfordton. The Bechtler Gold Coin located in the upper left portion of the inner circle represents the efforts of the German goldsmith Christopher Bechtler who settled in Rutherfordton in 1830 and both mined and minted gold until the Mint’s closing in 1852. Mr. Bechtler also operated a jewelry business in Town, adding to our mercantile community. He was well known for his trustworthiness and integrity.

The figure located in the center of the upper portion of the inner circle represents Brigadier General Griffith Rutherford and the efforts and activities that he put forth to settle our Country even before Rutherfordton was established.

The structure located in the lower left portion of the inner circle is Saint John’s Church located on Main Street. Built in 1847, this is the oldest original church structure still standing in Rutherford County. In addition to historic value, this represents the religious foundation on which the country was founded, and worship that is part of the community.

The middle structure represents the historic homes that are plentiful in Rutherfordton and the home in general in which families are reared, and perhaps the most important facet of this community.

The structure located in the lower right portion of the inner circle is the current R-S Middle School, formerly R-S Central High School. In addition to historic value, this represents education that is part of the community.

The handshake at the lower portion of the inner circle represents fellowship that is part of the community of Rutherfordton.

The circle shape represents the continuous cycle of generations and growth in the Town of Rutherfordton.