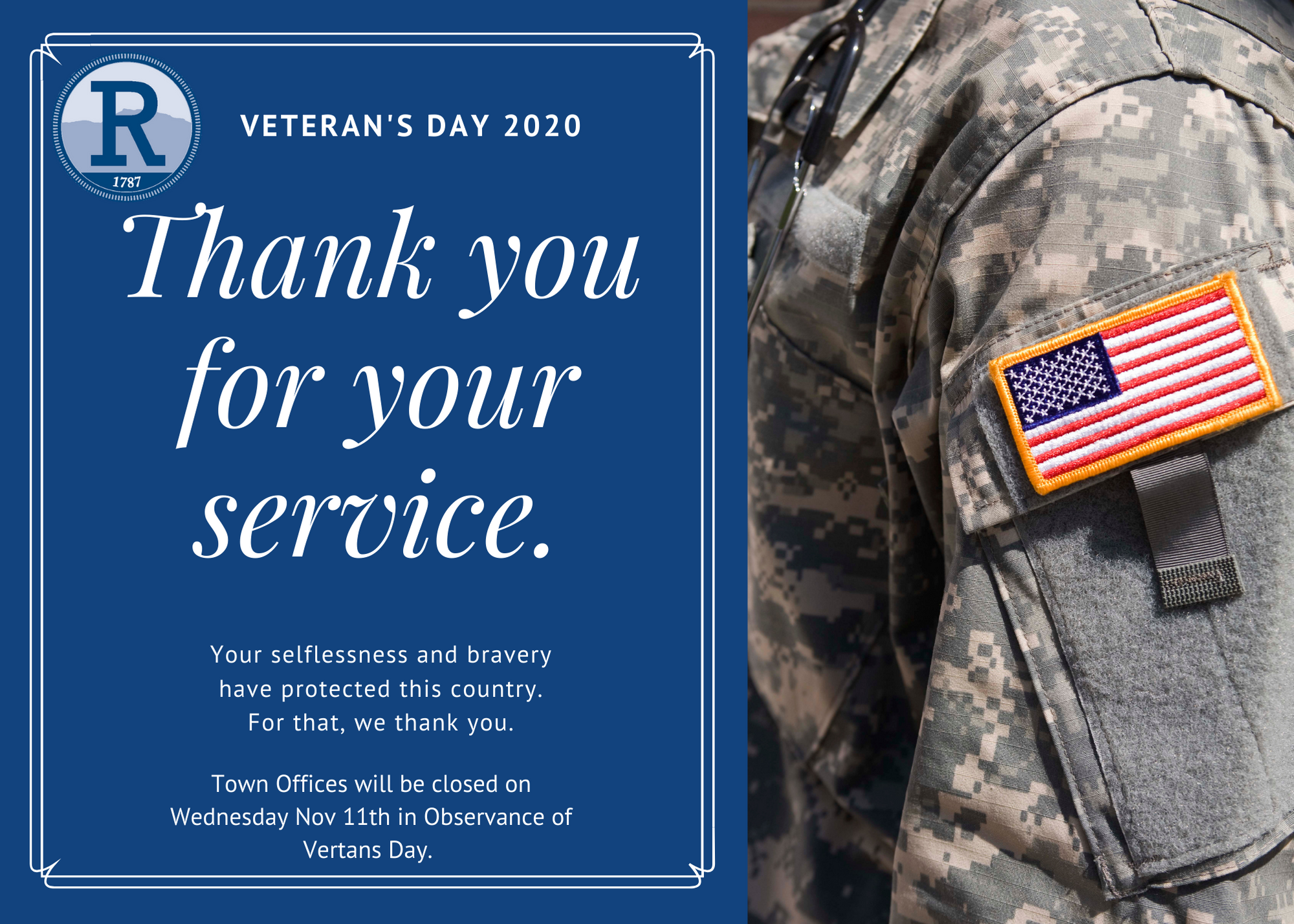 Town administrative offices & the Norris Library will be closed Wednesday, Nov. 11, in observance of the Veterans Day holiday.

Recycling collection schedules will be shift one day during the holiday week.

We encourage you to take time to thank the Veterans of our community for their selfless service to our country. Flags are available in the Rutherfordton Cemetary to honor those that have passed.

This year we would also pass along the following opportunities:

Kiwanis Park Memorial Bricks to Honor Those who have served: https://polarengraving.com/rutherfordtonkiwanisclub

Wreaths Across America – Placing Holiday Wreaths across the country. https://www.wreathsacrossamerica.org/

The Story Behind the Holiday: How Veterans Day was Founded

Soldiers have been held up has heroes as long as man has been at war. From biblical warriors to Greek gods and goddesses of war, there is no shortage of honor bestowed on those who vow to raise their swords against their enemies. So how did Nov. 11 become the one day of each year designated to appreciate the brave men and women across all wars who answered the call to serve? The simple answer is World War I.

The Great War, as it was previously called, ended at the 11th hour on the 11th day of the 11th month in 1918. Veterans Day began under President Woodrow Wilson as “Armistice Day” one year later, on the first anniversary of the end of World War I, Nov. 11, 1919.

In his proclamation, Wilson stated, “…reflections of Armistice Day will be filled with solemn pride in the heroism of those who died in the country’s service and with gratitude for the victory, both because of the thing from which it has freed us and because of the opportunity it has given America to show her sympathy with peace and justice in the councils of the nations…”

This, however, was not a uniquely American holiday. Countries like Belgium, Canada, England, and France used the date to honor their veterans as well. France to this day calls Nov. 11 “Armistice Day.” Canada designated the date as “Remembrance Day,” and Great Britain calls the second Sunday of each November by the same moniker.

It wasn’t until after World War II that the U.S. government changed the name to Veterans Day.

Congress amended legislation to change the name to Veterans Day in June 1954. President Dwight D. Eisenhower signed it and issued a proclamation that October acknowledging that the United States had been engaged in two wars since Armistice Day was first observed.

In 1968, Veterans Day was designated a Monday holiday under the Uniform Holiday Bill, which was intended to create a series of three-day weekends.

This decision was met with dismay and in 1975, President Gerald Ford made the move to have Veterans Day permanently held on Nov. 11, as the date maintains historical and sentimental significance for the American people.

This observance day is intended to honor the veterans of all wars, both living and deceased. Many local municipalities host parades and hang the American flag at half-mast. At 11 a.m., the country observes a moment of silence each year on Nov. 11.

And this year, 2020, marks the 101st year since Wilson proclaimed this day a holiday.