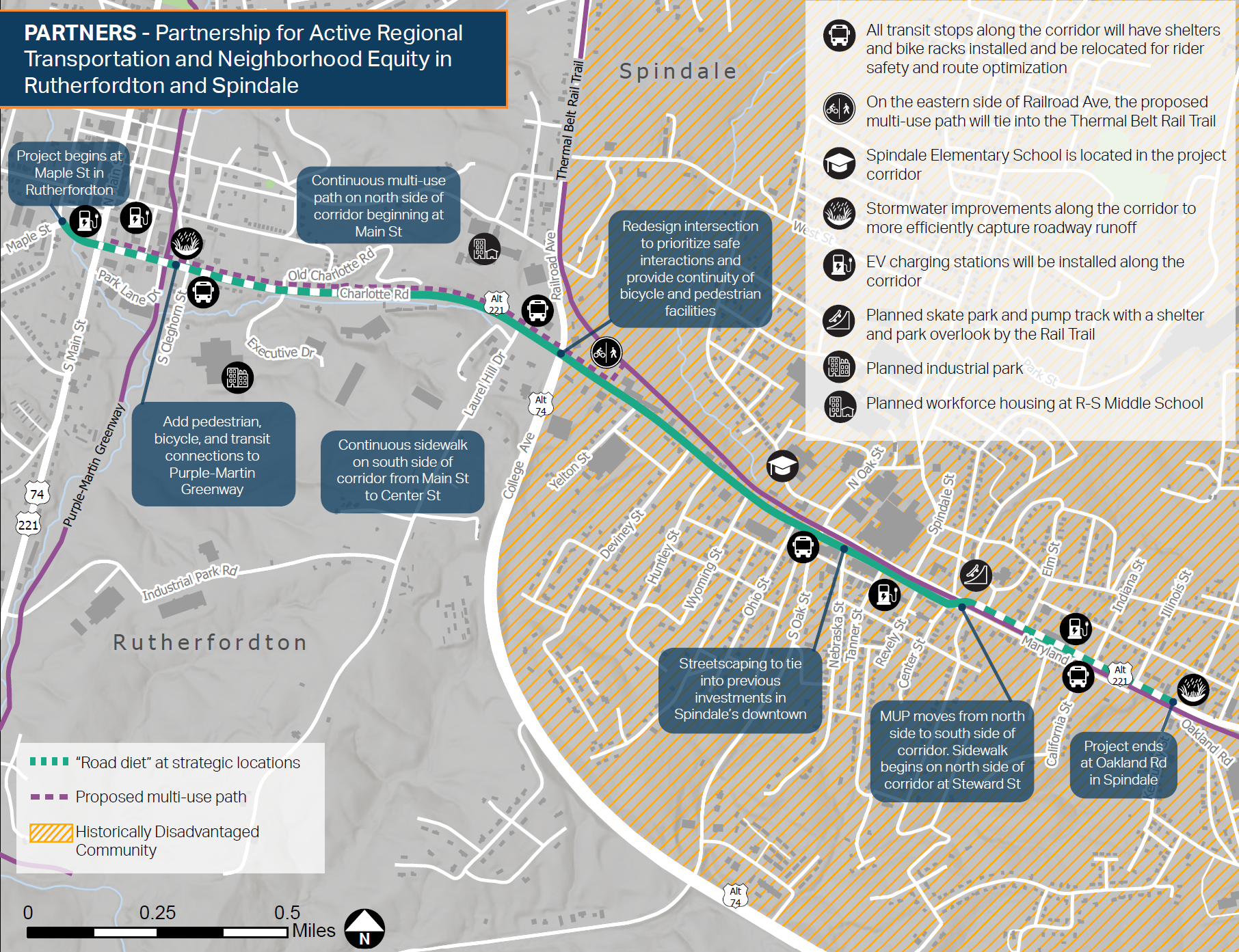 Rutherfordton and Spindale will directly benefit from the federal Bipartisan Infrastructure Law, as the Partners Project was recently approved for federal funding. This project, funded by a RAISE grant (Rebuilding American Infrastructure with Sustainability and Equity), is designed to transform the Charlotte Road, Rutherfordton, and Main Street Spindale corridor into a “complete street.” The funding, more than $20 million, will increase the efficiency and safety of the road, and make it attractive for all modes of transportation—vehicles, pedestrians, cyclists, and public buses.

Rutherfordton partnered with Spindale as well as the NC Department of Transportation on the project. Among other partners including Rutherford County Transit and Rutherford County Tourism Development Authority for the trail connections. The success of the project started with the town mayors and councils who have supported and advocated for the project and are pleased that it was approved. This will truly transform the landscape in our communities. The fact that this project received funding on the first submittal is a testament not only to the strength of the project but to the strength of the team that assembled to complete the application.

The entire project will include Charlotte Road in Rutherfordton, running east through Main Street Spindale and ending at Oakland Road. This highway corridor has been described as a critical route to essential community resources including Rutherford Hospital and Blue Ridge Health Clinic. Barrick said he was “shocked,” upon hearing the news. “A truly monumental amount of work went into this,” Town Manager Doug Barrick said. “I was blown away by the level of cooperation between Rutherfordton, Spindale, and the NC DOT. Everyone has been incredibly enthusiastic about this project. I’m delighted.”, Barrick noted that few projects are approved when first submitted. Spindale Major Mickey Bland has high hopes for the project. “This is going to have, I believe an enormous impact on our towns,” Bland said.

Spindale and Rutherfordton each committed $250,000 to the project, with matching funds from the Rutherford County Tourism Development Authority and funding from NCDOT bringing the project total to over $24 million.

When we first started down this road, we were constantly told how difficult it would be to be chosen on our first attempt at the funding,” Mayor Jimmy Dancy said. “Doug and Scott put together a great plan and we continued to improve as we worked through the process. Reality stepped on my toes while Doug, Scott, and I were sitting in the office of the chief of staff for Senator Thom Tillis in Washington.”Dancy says they were told the odds weren’t great for the project to be funded. “I started preparing myself mentally for rejection, but the three of us continued to talk on our way home as to what can we add to our ‘to-do list,” Dancy continued. “Good plans are not always rewarded, but continued hard work always finds sunshine.”

With funding now in place, NC DOT will work with the towns to finalize the plans for the corridor. One of the most notable improvements will be at the intersection of College Avenue, Railroad Avenue, Charlotte Road, and West Main Street. This intersection will be reinvented and will likely incorporate some sort of “roundabout.”  Other improvements include transit bus stations, street trees, a multiuse path connection the Purple Martin to the Thermal Belt Rail Trail, and other safety improvements. According to the overall project’s timeline, it is expected to be completed in 2026, at around the same time as the U.S. Highway 221 By-Pass around Rutherfordton. Rutherfordton officials hope the improved road will encourage people to leave the bypass and visit the town. “Charlotte Road will transform into a beautiful boulevard, welcoming travelers into Rutherfordton,” Barrick added.