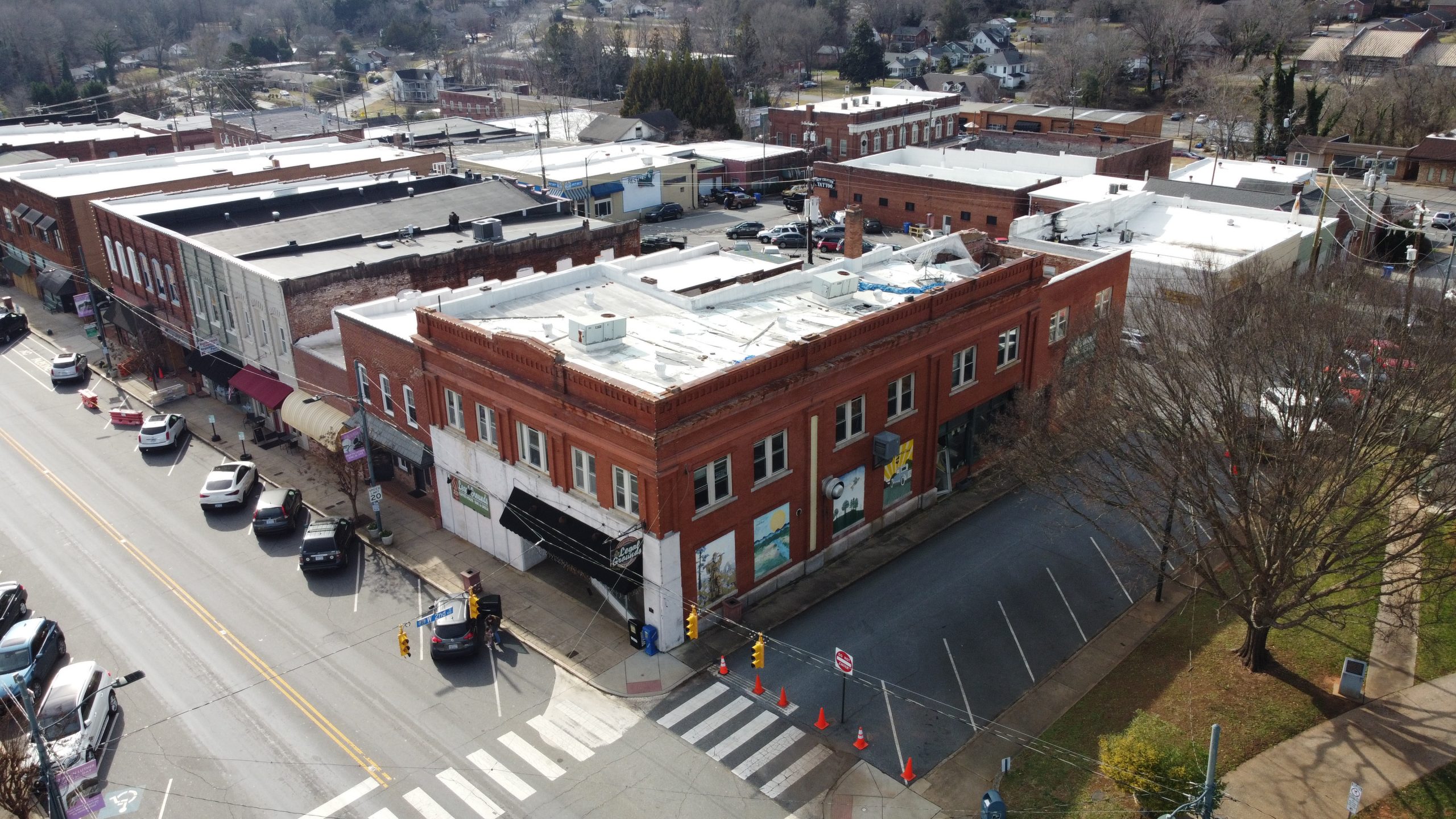 In 1912, the Commercial Bank building was constructed as the cornerstone of Downtown Rutherfordton. This two story structure has been ingrained over the years as the heart of the Town’s historic district. Depending on your generation, names like the Commercial Bank, Rexall Drug, and Legal Grounds have been the story of 217 North Main St. Standing over a century strong, the building now has become a blight to the Town’s historic core and poses a public safety nuisance, specifically the public safety hazard of further collapse to cars and pedestrians on Main Street and 2nd Street.

Over the past two years, the building has experienced multiple roof and internal collapses due to years of water infiltration from a leaking roof. Over the past five years, the Town has tried to work with the property owner in attempt to save the building, repair the roof, and ensure the viability for the next century. However, the glory of the structure has been subject to demolition by neglect by the current owners, forcing the Town to legally intervene to save the building and abate the public nuisance.

Given the state of the building, the Town sought a Consent Judgement Order from the Superior Court of North Carolina to gain legal authority to address the public nuisance, and was granted the Order on October 20, 2021. The Judgement Order addresses the public nuisance by granting the Town unconditional permission to enter the property for the purposes of abating or remedying the public nuisance per the authority granted to the Town under General Statute 168-193, including but not limited to demolition of all structures and improvements contained on the subject property. In simple terms, the NC Superior Court granted the Town of Rutherfordton permission to enter the property and address the public safety nuisance.

Regardless of the permission to remedy the public nuisance, the Rutherfordton Town Council’s first and primary goal was to save the historic building or the exterior walls. Unfortunately, new issues of degradation surfaced after the initial round of bidding with contractors, followed by recommendations from licensed structural engineer. The structural integrity of the building has rapidly declined due to the perpetuation of demolition by neglect and the weatherization of an open building.

The signs of impending collapse and failing foundation were confirmed through onsite visits with general contractors and the Town’s structural engineer, and were further highlighted in a report from the engineer to the Town Council. Based upon the continued degradation of the building, an option to save the building would require partial demolition and would not address the failing foundation due to the open building and multiple years of water collection in the basement. The Town Council moved to seek a Certificate of Appropriateness from the Historic Preservation Commission to demolish the building, which was approved on January 13th, 2022.

Per the Historic Commission guidelines, the Town obliges to document the historic building and ensure that a permanent record of the building survives including any documentation for photographs and drawings found before and during the demolition. Further consideration to save architecturally significant features of the building, including the granite lentils, granite facing, and any ornate interior or exterior details that can be salvaged will be saved by the Town. Given the current ownership status of the building, the Town will do all it can under the consent order, to safely abate the nuisance of the collapsing structure and to ensure the legacy of this building for the next century.

In March, the Town Council will review bids from contractors to remove the building and begin a new legacy for this property. The Town is responsible for the costs associated with the removal of the building, and these costs will turn into a foreclosable lien placed on the property. Town Council hopes that with the necessary improvements to the property, that it will be purchased and a newly constructed building will pay homage to the former commercial bank. But at the current moment, the main goal is to safely remove the building and preserve it’s history and impact on this community by saving any interior or exterior ornate details.

As the Town worked with the building owners, lien holders, and courts to intervene on behalf of the historic structure, it was apparent that more protection for our community and historic structures were needed. In January of 2021, the Town Council unanimously supported the Non-Residential Building Maintenance Code, that establishes minimum upkeep standards and ways to intervene when needed for maintenance and neglect issues. This code has already been utilized to work with owners to make repairs.